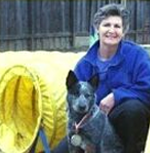 Cara Callaway, the founder of Jump City Agility, began teaching agility in 1995 and has started hundreds of dogs and handlers in the sport. Many of her students are now competing at Novice through Masters level with great success, and many are Nationally ranked.

As an owner of Australian Cattle Dogs which are not the easiest breed to train and handle, she is especially good with students with “difficult” dogs, and loves the challenge of dogs that need extra motivational training. She currently teaches more than a dozen classes a week ranging from first time beginners to masters level competitors and takes great pride in her students’ achievements. Through Jump City Agility, Cara also creates agility workshops to fit the specific needs of groups and clubs. She also does agility demonstrations for various charitable organizations, and puts on more than a dozen AKC sanctioned agility trials a year for local Southern California dog clubs. 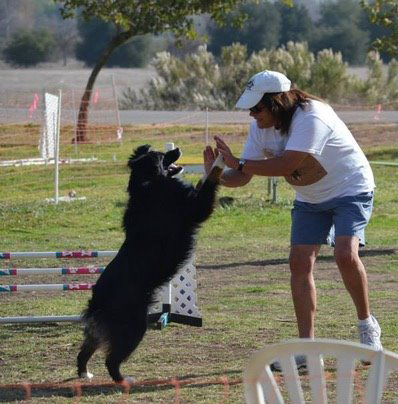 Janet Goliger has been training at Jump City Agility and competing in agility since 2011. Her Miniature American Shepherds have earned titles in AKC and USDAA agility competitions, AKC S.T.A.R. Puppy, AKC CGC-A, AKC Trick Dog and AKC Achiever Dog. Her pride and joy, Izzy, is also a TDI Therapy dog and an AKC Ambassador.

Janet is a retired certificated physical education teacher. She also holds two 2nd degree black belts in Karate and a green belt in Jiu-Jitsu. Janet is the creator of “C.L.A.S.S. Self Defense,” teaching children, teens, adults, seniors, and persons with special needs how to defend themselves in any threatening situation. Janet is the author of three books and was inducted into the Martial Arts Hall of Fame in 2012. Janet’s love for dogs has taken her to another level. She is currently working on a program for dog owners, how to protect yourself and your dog when faced with a threatening situation.

Janet has apprenticed to become an agility trainer under the tutelage of Cara Callaway, and continues to learn from Cara and other obedience and agility trainers through classes and seminars. Janet loves to teach and is excited to join the Jump City team of trainers.

Laurie Burnam came to the dog world with an already extensive background in training and competing with horses. She began helping train horses and competing in horse shows at age 14, receiving numerous trophies, ribbons and twice winning the prestigious high point year-end silver belt buckle. She continued with horse training for 35 years.

For the past 25 years Laurie has taught many types of dog training classes through Valley Hills Obedience Club, Pierce College and her own business Poochability Dog Training. Pet Obedience, Competition Obedience, Rally Obedience, Trick Training, Scent Work and of course Agility, using positive training methods and her naturally calm demeanor. Laurie has great respect for all animals and feels she has a special relationship with them. She believes her calmness comforts them and they tend to gravitate toward her presence.

Laurie is thrilled to join the Jump City organization and meet all the current and new students and their precious dogs.